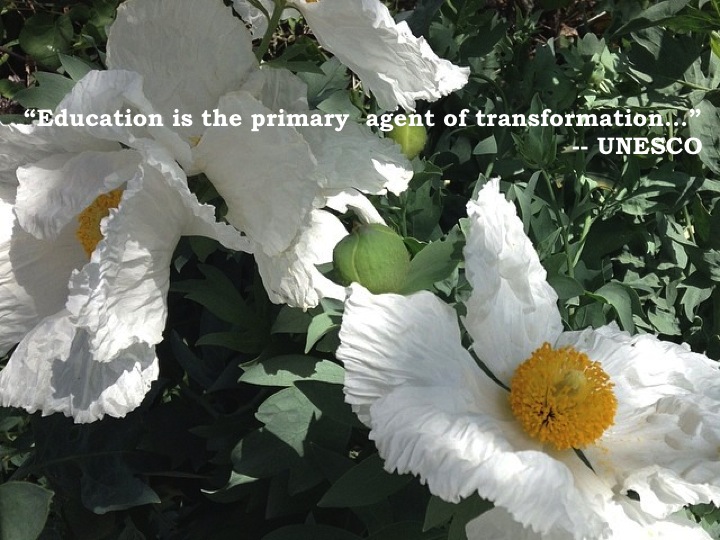 The fourth Drought and Beauty series lecture was last Friday, organized by the landscape architecture departments of Cal Poly Pomona, USC, and UCLA. Eleven of us gave quick, pecha kucha format presentations, followed by a brief response from two local writers. I chose to tell the story of one reason I work in landscape architecture: my education on the lawn.

According to Michael Pollan’s 1989 article “Why Mow?”, it was Frederick Law Olmsted’s 1868 Riverside community that introduced lawn to American suburbs in the form parks, greenways, and continuous front lawns. But it was Levittown after World War II that became the first suburb to sell houses with lawns already in place. The Levitts dogmatic support of the lawn was helped by recent inventions of the rotary lawn mower, pesticides and fertilizers made from the remnants of war explosives, and weed-free grass seeds.

Cristina Mileni’s 2005 dissertation mapped and modeled the biogeochemical cycles of turf grass. She mapped 32 million acres of lawn in the contiguous US. That’s our largest irrigated crop, three times larger than the area used for growing corn. No matter the climate, soil moisture, or natural habitat, the same turf grasses cover drastically different regions of the country – with the result that most require irrigation or chemicals or both to stay green.

My personal battle with the lawn began in 1998 when I landed in a typical suburban home just north of Charlotte, NC. The backyard was mostly a wood and practically took care of itself, other than an annual thinning of saplings sprouting beneath the trees. The front was mostly lawn. I didn’t mind at first but it quickly became a burden to mow with three small children under toe. One day, I watched a flock of starlings peck about on my lawn, reminding me of my childhood yard in Ohio. My neighbor across the street – with the crew-cut lawn to match his crew-cut hair, yelled “you got grubs … better kill them … or they’ll kill your lawn!” So I did some research.

Diazinon was recommended to kill grubs, beetles, spiders, fleas, a dozen other critters … and was available everywhere. I dug a little deeper (because I like birds and I love my children) and I found the EPA banned diazinon that year as a poison but allowed it to stay on store shelves for another four years. This enraged me. If the EPA wasn’t going to look out for my children, who would? I began reading every bottle, box, and packet before I brought it into my house.

Rachel Carson’s Silent Spring helped ban DDT in 1972 … but we’ve increased chemical use in our landscapes. … And it’s not working. The more chemicals we use, the more damage pests do to our crops, and the more resistance they develop to those chemicals. As I read I came across Cradle to Cradle design where the Waste of one endeavor becomes Food for another, as in nature where a tree creates blossoms and fruit to procreate and feed animals and then fall beneath the tree to build soil and create nutrients for that tree and other things that depend on the soil. What we have instead are toxins being used AS food to GROW food laced with chemicals and leaching into our groundwater and streams. Instead of Cradle to Cradle Design we’ve set up an entire Grave to Grave system.

To state the obvious, I was obsessed with grass … and the high cost of its perfection … and with eradicating it from my children’s lives. Inspired by my mania, my sister made the sculpture, above, called Blade. The vinyl represented the lawn’s artificiality. The huge scale gave us a new perspective on grass. I was so mad about grass and the toxic mess we were swimming in (and other issues around urban ecology) that I moved to Los Angeles so I could study landscape architecture at Cal Poly Pomona. Here we had an even bigger lawn, weirdly, that our landlord mowed occasionally, until he went to jail.

After the winter rain, with no mowing, the lawn became an overgrown weed patch… much to the delight of my children. They made mazes through it and hid behind mounds of sour grass and mallow. Little did I know, these are all edible and nutritious. These weeds have value. Dandelion greens sell for as much as $9 a pound. Our weedy gardens and lawns are a huge source of potential free food.

There are precedents for less work yielding more crops. Masanobu Fukuoka developed a natural farming method with no plowing, no agricultural chemicals or prepared fertilizers, and no flooded rice fields. His methods produced more food than Japan’s most productive farms. When I was still at home with my kids I read a book called The Lazy Gardener … it was my first introduction, at the very small scale, to Designing with Nature. To work with nature instead of against it, whether improving soil health, guiding water flow or planting for pollinators.

When I bought my own house in Los Angeles, I used those principles and low impact design to keep rainwater on site, use no chemicals, and have native and drought-tolerant plants under my orange, pecan, and Oak trees. I let nature do its work so I can work less. After 6 years, my garden requires no chemicals, and only occasional water during the drought. The orange tree gets my laundry water. The maintenance is infrequent (mostly in spring), and involves weeding and mulching, and transplanting the expanding succulents. These smallest choices can have big impacts. Consider this. According to the National Wildlife Federation:

Learning what went into to keeping lawns alive, even in the rainy southeast, changed how I felt about them. Lawn went from beautiful to ugly to me. I see a perfect lawn and cringe at the pollution and noise it requires to survive. Landscape architects, designers, and gardeners allocate resources in ways that can appeal to and shape the public’s sense of beauty. The more we do to communicate the importance of natural systems in our everyday landscapes, the more we can reframe beauty in the eyes of beholders. For what could be more beautiful than landscapes that offer clean air, clean water, healthy soil, healthy food, and a rich variety of plants and trees?